O’Connor Family History
The family names O’Connor, O‘Conor, Connors, and other variations derive from the Irish O Conchobhair. This means descendant of Conchobhair or Conchuir. It is one of the most common Irish family names and is well documented in ancient genealogical records. There were originally several O’ Connor septs –not all derived from the same Conchobhair. They arose as groups of people who lived in the same area identified themselves by the same name. The O’Connor septs are: the Connaught O’Conor; O’Conor of Corcomroe, Co. Clare; O’Connor Fály from Offaly; O’Connor Kerry; O’Connor Keenaght of Ulster. (Note that the spelling may or may not include an apostrophe; purists would say it should be omitted as it didn’t exist in the original spelling of the name in Irish).

http://www.spirited-ireland.net/map/_counties/ireland_map22.gif
Connaught
The Connaught O’Conor clan is descended from Conchobhar a King of Connaught in the 10th century. The sept is subdivided into the O’Conor Don, O’Conor Roe and O’Conor Sligo families. The O’Conor Don family has survived to the present day, with its family seat at Clonalis, near Castlerea, Co. Roscommon.
The Connaught branch of the O’Connor clan is often referred to as the Royal O’Conors, perhaps because two of its members achieved the title of High King of Ireland. Turlough Mor O’Conor was inaugurated as High King (Ard Rí) in 1119. He ordered the making of the Cross of Cong – an intricate work in silver, gold and precious stones, which was used to carry a piece of the ‘true cross’ around Ireland and to promote his rule. 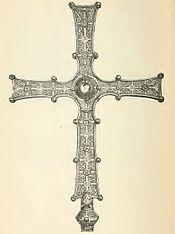 Cross of Cong – inspired by High King of Ireland Turlogh Mor O’Conor
http://upload.wikimedia.org/wikipedia/en/thumb/f/f1/Cross_of_Cong.JPG/175px-Cross_of_Cong.JPG
His son Roderick (Rory) O’ Conor became High King in 1166. He was the last native King of Ireland as his reign saw the arrival of the Normans. While he managed to repel the Norman forces from crossing the river Shannon, he was unable to stop them taking over much of the country. He abdicated in favour of his son Conor Moinmoy and spent the final years of his life in seclusion in the Augustinian Abbey in Cong. He died in 1198 and is buried with his father, Turlough Mor, in Clonmacnoise in County Offaly.
In 1201, a half brother of Rory’s named Cathal Crovdearg (Charles of the wine red hand) became King of Connaught. He kept the Normans at bay for many years by wile, strength and courage; they only conquered Connaught in the years following his death in 1224. Religion was always a keystone of the O’ Conor life and Cathal Crovdearg founded many abbeys during his reign including Ballintubber Abbey.
The O’Conors long history as builders wasn’t confined to Abbeys. Many castles were constructed at their behest. Ballintubber Castle, probably built by Hugh O’Connor in the 14th century, was the family seat of the O’Conor Don sept until the 17th century. It was lost during the Cromwellian period, but regained by Charles Owen O’Conor in the 19th century.
While some of the Connaught O’Conor clan survived the ravages of the Normans and Cromwell, other branches sunk into poverty and despair. One of these was Denis O’Conor, a nephew of Owen O’ Conor of Ballintubber castle. He imagined that one day he would regain the ancestral lands and after a court case in 1720, he was granted 500 acres at Ballanagare, Co. Roscommon. In 1820, his descendent Owen O’Conor became O’Conor Don and inherited the estate at Clonalis. A large house was built there in 1878, successor to a previous house.The last head of the O’Connor Don family to live at Clonalis House was Rev. Charles O’Conor SJ, Don who died in 1981. The title is now held by Desmond O’Conor Don of Sussex, England.
Clonalis House is still occupied by the O’Conor Don clan descendants – Pyers O’Conor Nash and his family. It is open to visitors daily and also provides accommodation, if you want to spend some time there exploring this home of the O’Connor Don clan and its historical artefacts.
Read a heartwarming account of moving to Clonalis House in 1981 and family history by Pyers O’Conor –Nash on the Clonalis House website.
http://clonalis.com/oconors-kings-of-connacht-high-kings-of-ireland/
Coat of Arms
(O’Conor Don)

http://www.araltas.com/features/oconnor/s_oconnor_donn.gif
Their motto is: ‘From God every help.’ ‘O’Dhia gach aon cabhair’.
Munster
County Clare
The Corcomroe O Connors of North Clare are also descended from a Conchobhar –who died in 1002.
http://www.clarelibrary.ie/eolas/coclare/genealogy/oconnor_family.htm
County Kerry
The O Connor Kerry is a prolific sept based in North Kerry. They owned large tracts of land in the barony of Iraghticonor – the land governed by O’Connor. The family seat, Carrigafoyle Castle, near Ballylongford, was built in the 15th or 16th century. The O Connor name is to be found throughout the county to-day.
Ulster and Leinster
The Ulster O Connor sept was identified as the O’Connor Keenaght (Derry). They were overthrown in the 12th century by the O’Kanes. However, some O’Connor families in Ulster claim ancestry from this sept.
County Offaly
The County Offaly O’Connors – O’Connor Fály, who gave their name to the county, are also of royal lineage – descended from the second century King Cathaoir Mor. Their lands were in County Cavan, Westmeath and Offaly. Their name came from Conchobhar who died in the late 10th century. Their fortunes varied as the Anglo Normans spread across Ireland,in the 12th century, to Offaly and took control. Some lands were recovered by Calvach O’Connor who was chief in 1,417. However, after his death in 1459, the lands were lost to the invaders again.
Ranthangan Castle , Co. Offaly was originally the family seat. The castle was attacked and taken by the Anglo Normans, the Fitzgerals in the 15th century. It was demolished in the 18th century.The family seat moved to Dangan/Daingean in Co Offaly following the Anglo-Normans attacks. The name Dangan/Daingean comes from Daingean Ua bhFáilghe which relates to the island fortress of the O’Connor Fály clan. The clan mainly died out in the sixteenth century due to death on the battlefield – although there are many of the name in the county to-day.
O’Connor music (before Sinead and Hazel)
A prolific and noble clan such as O’Connor can expect to have many tunes and airs written in their honour. I was taken by the tunes of the blind harpist Turlough O’Carolan(1670-1738) written to honour his patrons the O’Conor Don family of Connaught. O’Carolan’s harp can be seen in Clonalis House.
Denis O’Conor
http://www.irishpage.com/songs/carolan/den2note.htm
Maili na ráite suairce - Molly of the merry speech
http://www.irishpage.com/songs/carolan/oconnote.htm